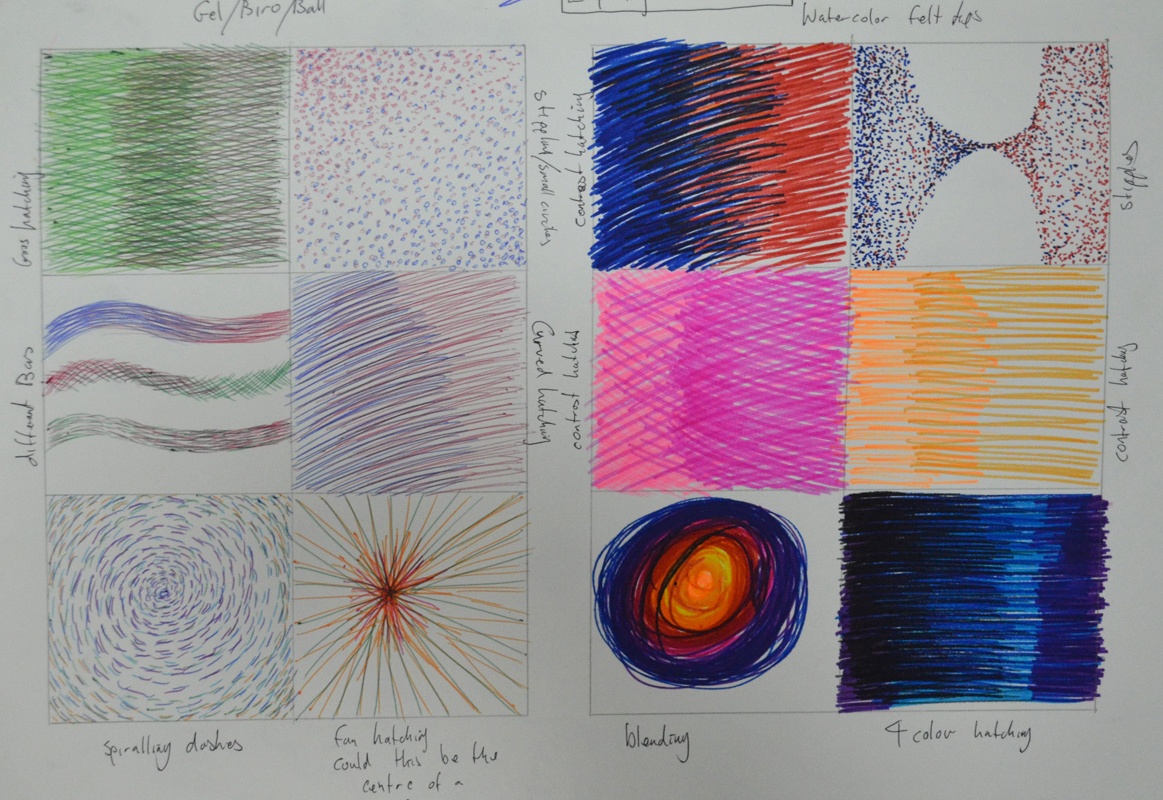 In this exercise I set out to explore the different coloured mediums I had available which included oil pastels, soft pastels, felt tips, markers, different coloured inks and dip pens as well as coloured pencils and a pack of coloured ball point pens. Just like I did in the Making Marks Project in Part 1 I decided to go at this project using a mixture of doodling and filling in squares with different techniques.

I started out with coloured pencils I had recently bought some Derwent coloured pencils for the composition development of assignment 1 but have yet to discover their full potential. I began by putting together a rough colour wheel based on one that I found online to see how the colours would blend together, there are much more possible colour variations  to be had from blending this medium but it gives me some idea and will help me in the future.

In the squares i tried different hatching techniques such as cross hatching and horizontal hatching. some techniques work better with this medium but I think all can be utilized in a drawing and this gives me some idea of what each technique can be used for,

With the oil pastels I decided to do some experimenting by doodling just to get a better feel for this medium as I know I will be using them a lot later. I found that they were quite good forstippling and leave a lot more colour on the page when stippling than coloured pencils which weren’t great and found myself drawing circles with them. They were also really good for hatching but can also be smudged quite well, so all in all a very versatile medium.

At the start of the course I bought some soft pastels but haven’t really used them until now. I hadn’t noticed that they were a portrait set so I didn’t have much choice of colours, however I did enjoy working with them. They were very good for stippling and hatching and depicted tone very well, in one box I did some stippling and then smudged over the top and was rather pleased with the result.

I’ve used these a couple of times now in both the Study of Light Reflected from one Object to Another exercise in part 1 of this course as well as in my finished piece for the Natural Forms part of Assignment 1 but yet still have to discover their full potential. Hard pastels are great for hatching and smudging as well as layering. They are also quite expressive when using certain techniques and they blend very well.

I bought a cheap pack of Staedtler coloured ball points that were in a sale in a local art/book store and tried out different techniques, now I know from the work I have seen of other artists in ball point that they are a great medium to use, however techniques have to be improved, when hatching they seem to work better when you lift the pen off the paper towards the end. I get a feeling they are probably better for small pieces rather than large drawings.

The felt tip pens that I have here are not a normal felt tip but a watercolour pen, I didn’t know they existed, the colours are very vivid and seem to better when used for darker images. Stippling is great with this medium but when hatching they tend to clot on the paper towards the end of the stroke so like the ball points I found that they work better if you lift your pen off the paper towards the end of the stroke. These watercolour pens also blended quite well, I have yet to try out normal felt tip pens but shall be doing so quite soon.

I used markers for the Patrick Caulfield Research point but only used them in blocks of colour, I really enjoyed using them just as I did in this exercise. They were brilliant for stipling and hatching and depicted tone very well, I also filled a square with hatching using both the pointed nib and the chisel nip and found it to be very expresive. Again they tend to clot but not as much as the felt tip and I found that that they are probably better for darker drawings.

This is a medium that I am still struggling with I have a good few Ecoline colours to play around with and have been experimenting with different papers but I think my nibs are letting me down, I shall be investing in some quality nibs very shortly. However, i did get some decent results this time. Starting off with a bit of doodling I got used to the feel of the pen on the smooth paper in my A5 drawing book then did some stippling and hatching. I get the feeling that it is best to let the inks dry before using other colours. I found that they were great for stippling on the smooth paper but then on water colour paper not great at all the same went for hatching. This is a medium that I want to see myself using more of as I love pen and ink drawings so it is going to be worthwhile exploring this medium more deeply.