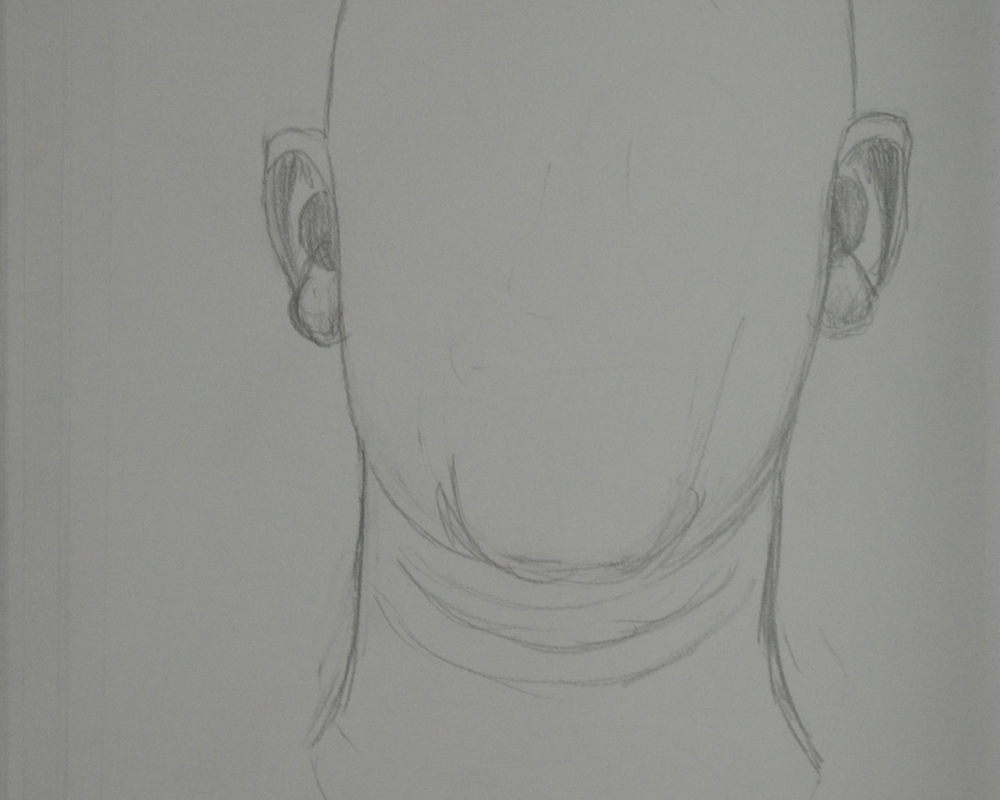 For this exercise I started off with 5, five minute drawings of my face describing different angles of my face and head.

I made the first two 5 minute sketches looking into the forward camera of my tablet that was sitting on the table. This meant I was looking down at it (with my head slightly to the right) so all attempts at trying to give myself a chin failed as it disappeared into my neck (the disadvantage of having an overbite.

The second sketch was again made looking into the front camera this time with my head level looking forward, which meant the camera was looking up at me and up my nose, which actually came out looking like it wasn’t my nose at all. If I cover up the bottom half of the paper it does look like me but with the dodgy nose…no relation.

The third sketch was done looking into my bedroom wardrobe door, with the bedroom light on the right of me it cast some really dark shadows across my face. Even though others would probably say that it did not look like me and I actually wrote that it did not resemble me but every time I look at it I see more of myself in the drawing.

For the last drawing I was facing the other way, the drawing looks more like a cartoon, which I think looks quite good . The eyes however should be looking at me and I just can’t think how I managed to the pupils so far over. There isn’t much resemblance at all, probably because the face is too long.

After the 5 minute drawings I made 5 more quick sketches concentrating on the overall shape of my face which wasn’t an easy task. This time I bought a mirror from the twenty baht shop, and while I was buying the mirror and some toys for the kids my youngest daughter lost their tablet in the shop and they spent the next two hours crying until their mum came to pick them up.

Anyway, like I said this wasn’t an easy task, for one reason, as I said before I don’t have much of a chin and so the bottom half of my head is not as defined as the top. I decided that it looked like a cross between an hexagon and an heptagon and so did 5 sketches trying to perfect the shape.

The drawing above is probably the closest shape to my head but I didn’t realise it until I drew the chin in afterwards with a biro, after I had finished the exercise.

At the time I thought that the drawing above was a better likeness and so I drew the shape across the page trying to get a sense of likeness. This probably did work as I realised it wasn’t the right shape and that it was too wide.

Eventually I drew something closer to the shape of my head and then drew in the ears and chin and then the neck and continued to correct the shape of the neck until it was spot on.