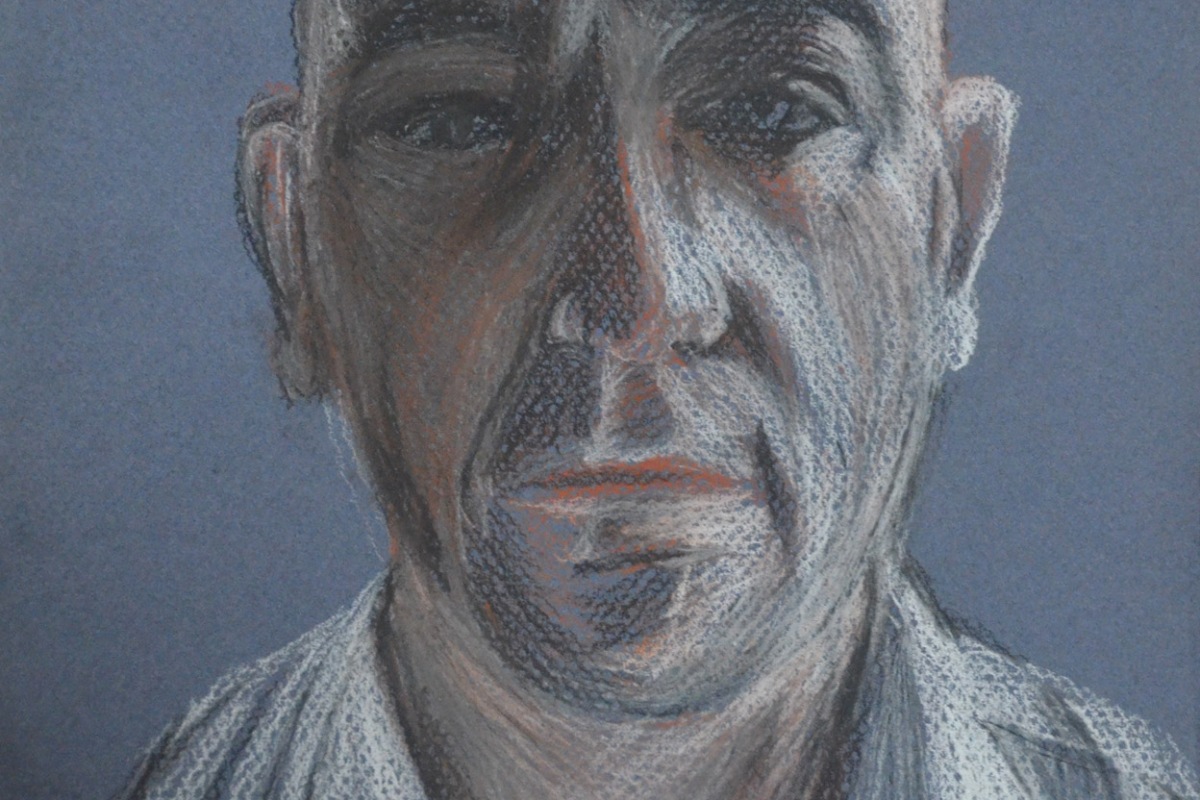 I was looking forward to this exercise, the only other time I had done a self portrait was at the start of this course last year which was basically a 40 minute sketch to christen my sketch book. I did quite well with that and I thought I would do great after learning so much.

I started by drawing with ballpoint in my sketchbook, the first sketch took 25 minutes and really didn’t resemble me at all. The shape of the head was good and I got the hairline just right, even the eyebrows were ok but everything else was well out. I was drawing looking into a mirror on my coffee table so it was difficult to keep the angles every time I lifted my head up from my sketchbook.

The second drawing was a bit better, I always seem to start on the left eyebrow and then draw in the shape of my head from the top of my ear to the crown of my head and then draw the rest of the top left-hand corner of my head. Then when I have something to work from I draw in my nose and then over onto the right eyebrow, shadow on the right eye and then mouth and chin, with the folds of skin from my cheeks framing my nose mouth and chin. Although this technique helps me work fast sometimes it doesn’t come together as it should do and I end up looking like someone else. I not only look older in the drawing below but from a distance I look like a posh toff with a monocle in my right .eye

Again the drawing below didn’t come together as I’d planned and I ended up looking like a completely different person with just my features all out of proportion, namely my chin and area above my upper lip/below my nose.

I showed the photos above around, my girlfriend said they don’t look like me while all my students said ‘Mr Mark’ straight away.

From there I had some light brown ingres paper left , about A4 size, so took a photo of me laid on the sofa and made a sketch in soft pastel, I should have taken aphoto of each stage of the drawing as it looked great before I messed up on the eyes and made myself look like an alien with larger-than-life eyes.

I decided it was time to draw a proper self portrait in a proper mirror, so I took my Derwent watercolour pencils and watercolour drawing pad into the bedroom and produced the drawing above in just under 2 and a half hours over 2 evenings. The drawing is spot on, it makes me look about ten years older as others have enjoyed pointing out but that’s the electric light in the bedroom. I have tried and tried to get a better photo of the drawing as it looks great but the photos I have took do not show the colour of the hatching to be as vibrant as it is in real life.

The drawing above was started as a hard pastel sketch to show how the left hand side of my face caught the light from a lamp directed at my face and how the most of the right hand side was left in shadow apart from part of my cheek, ear and below my eye lid and it was perfect until I messed up and went overboard on it and then ended up trying to draw my entire face in detail making this self portrait look like like a rubber horror mask from a joke shop at the seaside.

The drawing above was the second self portrait in 4B pencil, it took me an hour and a half and is a perfect likeness, one friend said that it is me in another 10 years, unfortunately I do look quite old with my specs on but it can’t be helped.

I produced the drawing above in my lunch hour at work. I left a drawing board at work for me to use when I have a bit of freeetime and I had an A4 size sheet of blue ingres paper in my sketchbook so I decided to see what I could posing in the front camera of my tablet. However when I opened my artist wrap up, all I had in there was conte pencils in black and sanguine and a Derwent Chinese White Pencil that had been sharpened to over the half way mark.

I’m long-sighted which is probably why I messed up on the other drawings with my glasses off but this one came together really well. I took it home to touch up and do do so I put t between the pages of my sketchbook, which is quite thick. When I get home the paper seemed to have been compressed inside the book and it was almost impossible to do anything with it, which is probably for the best as I am really happy with this finished piece which I feel looks great.