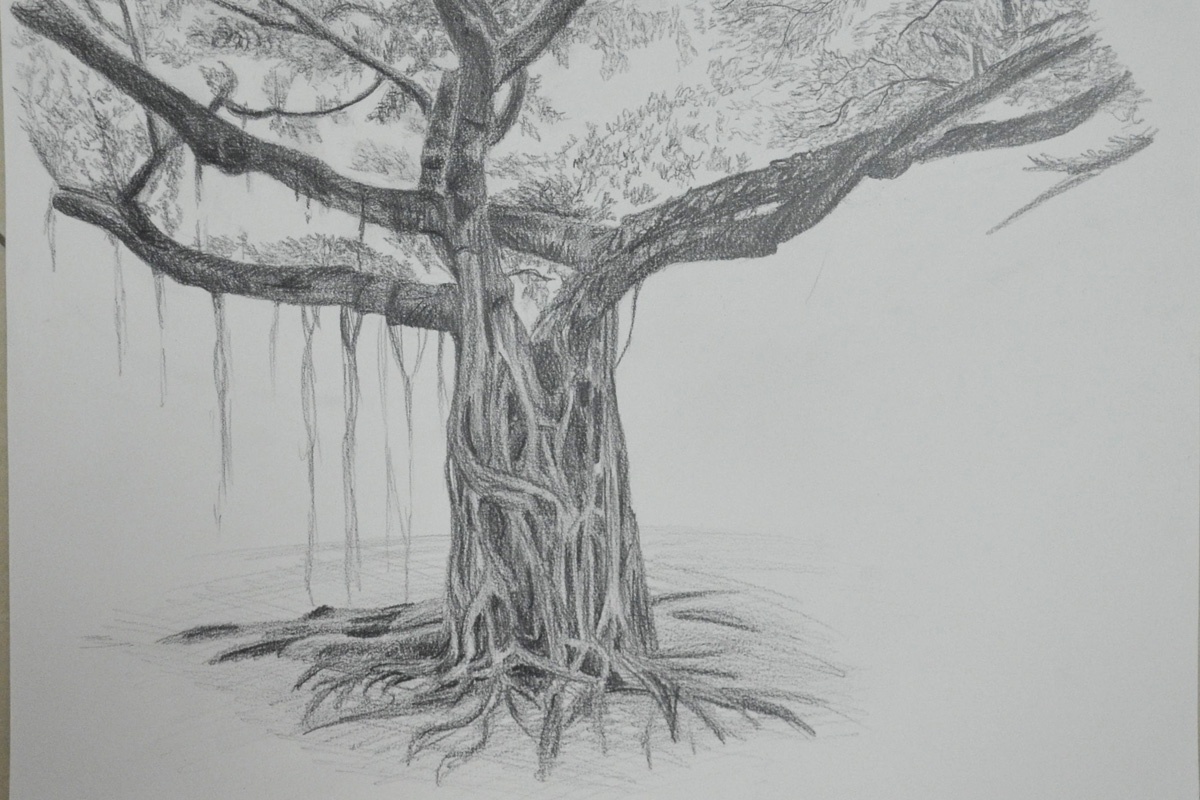 How many different tree types have you drawn?

I actually thought I had drawn 3 different tree types but looking at the drawings again and my photos I think I have only drawn two, three if you count the strangler fig as a species iof tree. I thought that the trees in the study of a several trees exercise were a different species from the Banyan tree in the Larger Study of an Individual tree but looking at them now I think the tree in the latter is the same tree in the later stages of being strangled to death by the fig.

What techniques did you use to distinguish each type?

I’d say smoothing and hatching the first ‘Alien’ tree in the sketching individual tree exercise was very smooth like it was naked without bark. So smooth that you could see the stretch marks in the tree so for this tree I used very fine hatching, smoothing with my finger and erasing with the putty rubber. For the individual Banyan tree I used more hatching and did less smoothing but with the study of several trees it was all very rough hatching with oil pastels.

What did you do to convey the mass of folioge?

The banyan trees were pretty much borrowing most of their folioge but where their was some I used squiggling and the sketches of an individual tree I came to realise that the leaves were in groups of three and so I squiggled in a kind of upside down Adidas trifoil shape not that it is noticeable in the drawings. To convey depth I then shaded in under the squiggles with more pressure on the pencil.

How did you handle light on the trees? Was it successful?

For the first sketches the light was above the folioge and so I showed light and shadow on the tree by way of hatching and yes I think I was successful. For the larger study of an individual tree the sun was behind the tree and so the whole of the tree was very dark but I depicted the light shining through the branches on the right by drawing the trees fainter than on the left. I don’t know how others will see it but it worked for me. I was going to use the putty rubber to show rays of light shining through but I sprayed it too soon.

In the last exercise I used colour, it was early evening, and I think I managed to show this quite well in my drawing.

Did you manage to select and simplify? How did you do this, and what could you do better?

I did this differently in all three exercises. In the first exercise it was a case of not drawing to the top of the tree and only drawing what I felt was important, the roots, the trunk and the squiggled leaf shapes that framed the branches and trunk.

In the second exercise, I wasn’t too sure where branches and leaves were coming from and would have probably had to draw another 5 plants and bushes to get to the source, so I decided draw only what was within the branches of the Banyan tree.

With the third drawing, a study of several trees I simplified by zooming in, I could probably do better next time by drawing more of the branches of the trees. However, I am still pretty pleased with the close up of the trees in the finished drawing.