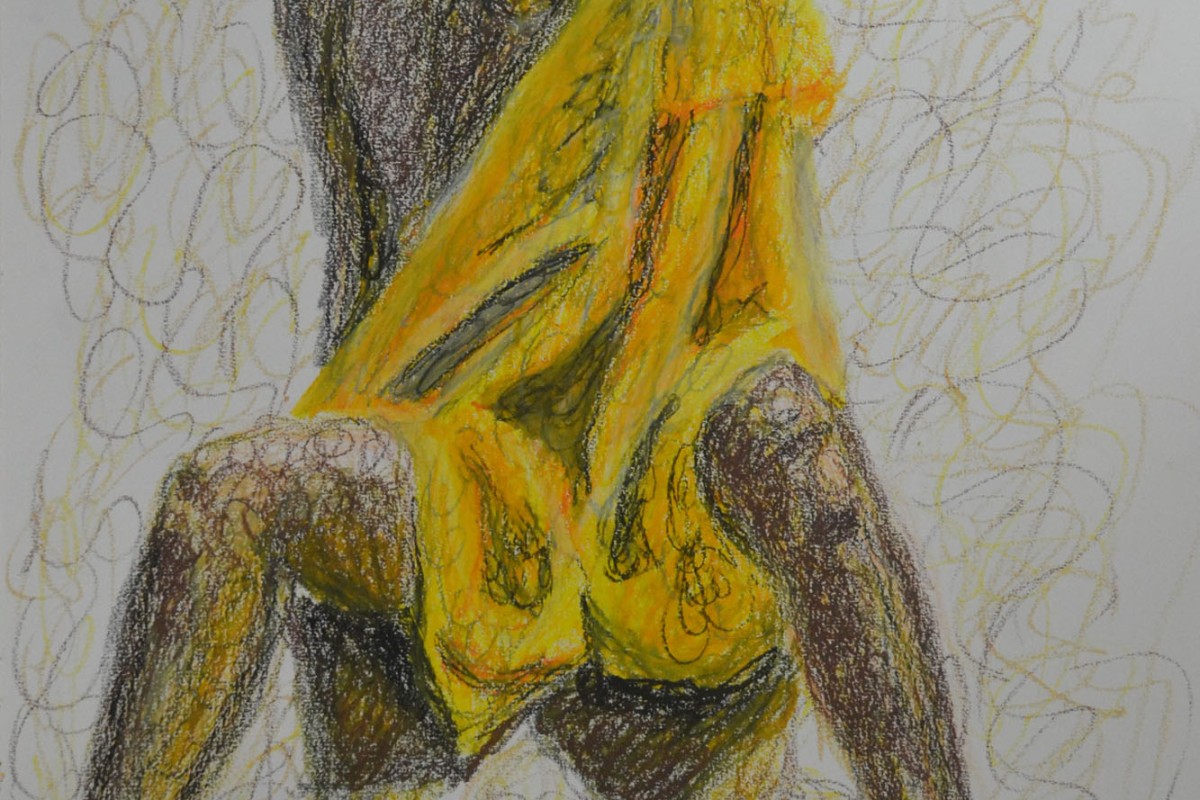 For this exercise I started off working with the model and from there I moved onto sketches. Last weekend was a big public holiday here in Thailand, mothers day, the Queens birthday which was actually on the 12th but the Thais have 4 days holiday.

I had previously tried to draw in the style of Alberto Giacometti; although I wasn’t too impressed with a lot of his work, which I had said in a previous post made me feel uncomfortable and a little anxious, I did like some of his work. and I rather enjoyed drawing in his style in the second part of the research point which I think reflects in the first piece for this exercise below. The ability to create a 3D form from squiggles is just too appealing to me and oil pastel felt like the perfect medium for this drawing. I am already starting to think about my final assignment and this was basically a practice piece for the upcoming assignment trying to produce an expressive (maybe), erotic nude, with some type of cloth covering part of the figure.

The second piece should have been bigger, also in oil pastel I tried to produce an expressive drawing with a different technique rather than a different medium. The technique I chose for this was a very contrasting technique to the squiggles above, horizontal hatching. The pose was also very different, this time the model wore no cloth at all and was laid down with her head towards me. The problem here though was trying to produce some shadow below her head to show that her hair is actually spread out across the floor, as looking at the finished piece below it looks like the head is floating.The other problem with this drawing is that the figure should fill the plane however when I was drawing the figure was happy with the outline and therefore I didn’t want to change it. So I filled the paper with furniture.

At this stage I had an idea for the next piece. Firstly I uploaded the  several photos of different drawings to Facebook so I could print them off at work later that evening and see which ones look best ripped or cut up as a collage.

I bought three packs of different coloured paper, orange, yellow and peach (I think) I then printed the picture out at 9 copies to a sheet to see which looked best. I decided on drawing 2 above and the photo below shows how it looked printed out.

The net day was my birthday and I spent the afternoon getting creative:

The next challenge was to create a collage piece using the printed sheets of paper for the cloth draped over the model. I chose to do this drawing on watercolour paper and to draw the model in watercolour pen.

Firstly I drew the whole shape of the model with cloth draped over her in pencil and then with a black pen I drew around the shape of the cloth so I could see it through the paper enabling me to draw shapes in pencil to be cut out. Unfortunately the lines made by the black pen were too wide and so I had to make the shapes bigger to cover up the lines around the left arm which now looks withered.

From there I started to cut out and glue on small pieces of orange paper to depict the shadow in the folds of the cloth but I decided that I would probably mess up and and instead to finish these details in an orange watercolour pen with the darker shadows in green. After I finished with the cloth I finished of the shoulders, head, arms and knees, the vibrant lighter colour pens really made the darker colours stand out. I think because of the thin left arm the knees look two fat, this is my only regret here.

For the next piece I chose sepia ink with a dip pen and brush as my drawing tool of choice, I originally wanted to do a different coloured wash over the top but decided against it as I loved the plain and simple finished piece too much.